It was Thursday the 6th of March when The Vogue Talents Remix event took place. My grandmother, Alexis, and I were working at the Mifur fair the entire day, and were exhausted but we were waiting for so long to go to this event sponsored by Vogue Italia and The International Fur Trade Federation (IFF).

We cleared up the stand to leave for the evening, and as we were walking out, they wouldn’t let my grandmother out! During the Mifur fair, anyone that enters wearing a fur must put on a security sensor, but for whatever luck that evening, it took them almost a half hour to take off the one they had stuck onto to my grandmother’s precious fur!

We raced to my car to get to the show and got stuck in traffic as there was a strike that day of Milanese transportation, but somehow, we made it in time! Let me explain a bit about what REMIX is, it is an international competition that aims to discover new designers in fur design. Approximately 600 young talents from across the globe in 22 different countries have entered since REMIX’s foundation in 2003. IFF hosted the 11th REMIX last week here in Milan, with the backing of Vogue Italia.

What I love about REMIX is that is allows and supports the use of fur by young designers, create with it in innovative ways. It was a fantastic well-orchestrated fashion show with fun music and cool graphics that displayed the moodboard and color story of each designer’s collection. It really allowed each designer to convey their personal message to the attendees.

The jury consisting of Franca Sozzani, who is the editor-in.chief of Vogue Italia, along with fashion designers Tommas Aquilano and Roberto Rimondi of the Italian fashion house AQUILANO.RIMONDI, who offered an internship to the REMIX Gold prize winner, Shohei Ohashi of Japan. Shohei is currently in his last year at the Osaka Bunka Fashion College.

Shohei managed to impress the jury and myself with his collection that was comprised me three looks inspired by optical art. It was a color palette that was classical, black, white and grey. However, the designer was successful in creating psychedelic illusions by using various materials and manipulating them in several ways from different furs. He tweaked patterns by using mink, Finn raccoon and goatskin.

It was a collection executed well due to the quality of workmanship. Each cut and stitch was definitely planned out so carefully in order to create these pattern like, almost graphic effects with the various fur skins. Shohei was successful with his collection and took the prize home because he didn’t just create fur coats, but managed to create true works of art, and I really appreciate that kind of initiative.

It is not surprise that he won, as last year he won the Pimp My Coat Award at Remix in 2013.

The REMIX Silver prize was awarded to Altynai Osmoeva of the United Kingdom as she succeeded in using mink fur delicately, as she used it as a type of embellishment, along with serigrapher pink colouring throughout her collection. It was a collection that was quite feminine and fashion forward. I could picture many Milanese women going out for the evening for dinner or to La Scala Operahouse wearing one of these outfits. Osmoeva was born in Kyrgyzstan in Central Asia and graduated from Central Saint Martins College of Art and Design in June of 2013 with a degree in fashion design.

The REMIX Bronze prize was awarded to Mijia Zhang of the United States that presented a quite avant garde collection through her choice of colour palette and use of technology to invent interesting textures with the usage of fur. It reminded me very much so of Comme des Garcons in mood and fit style, as it was an oversized collection in terms of sizing. Zhang is originally from China and is a fashion design student at Parsons, the New School for Design in New York.

And lastly, my favourite piece of the entire show was by designer Nikoline Liv Andersen of Denmark who was awarded the Pimp My Coat Award with her ability to develop new ways of treating fur and piecing them together. Andersen has been collaborating with Saga Furs auction house, where she helped to experiment with fur as a material and developed new ways in its treatment. This is now the third year of the Pimp My Coat award, and give the opportunity to designers to makeover a vintage coat in a way that is relevant to current fashion. 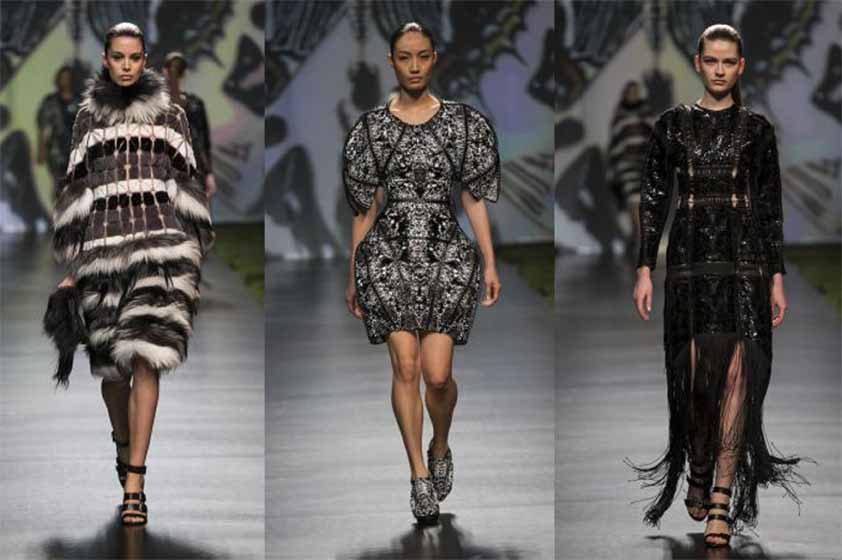 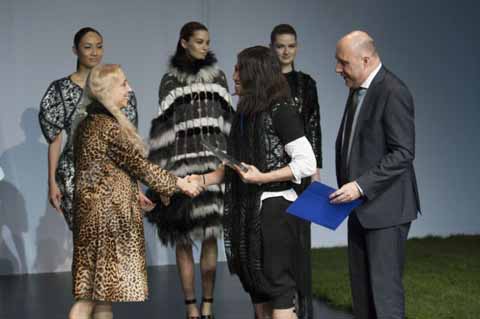 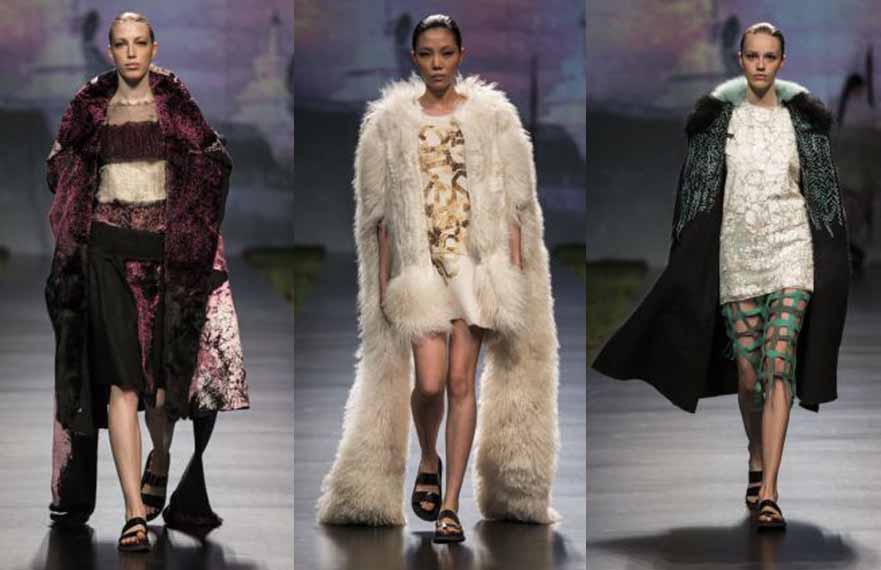 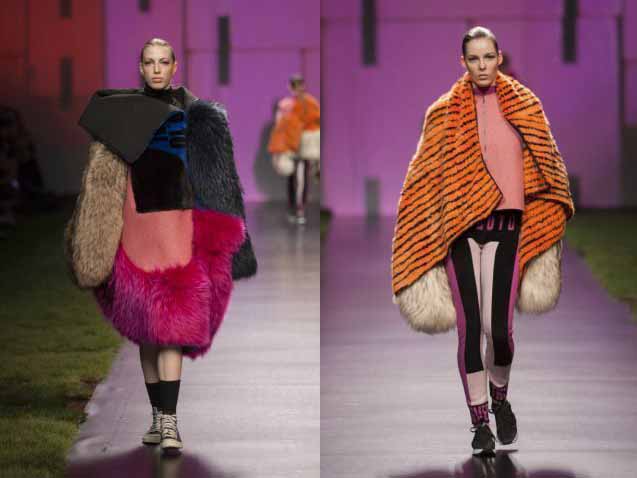 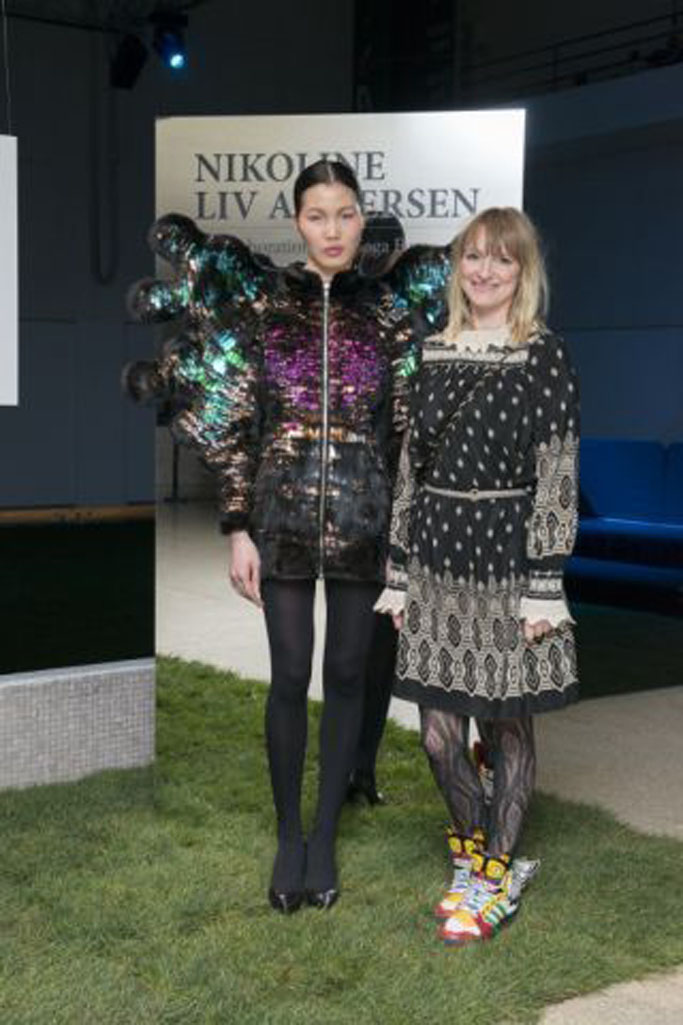 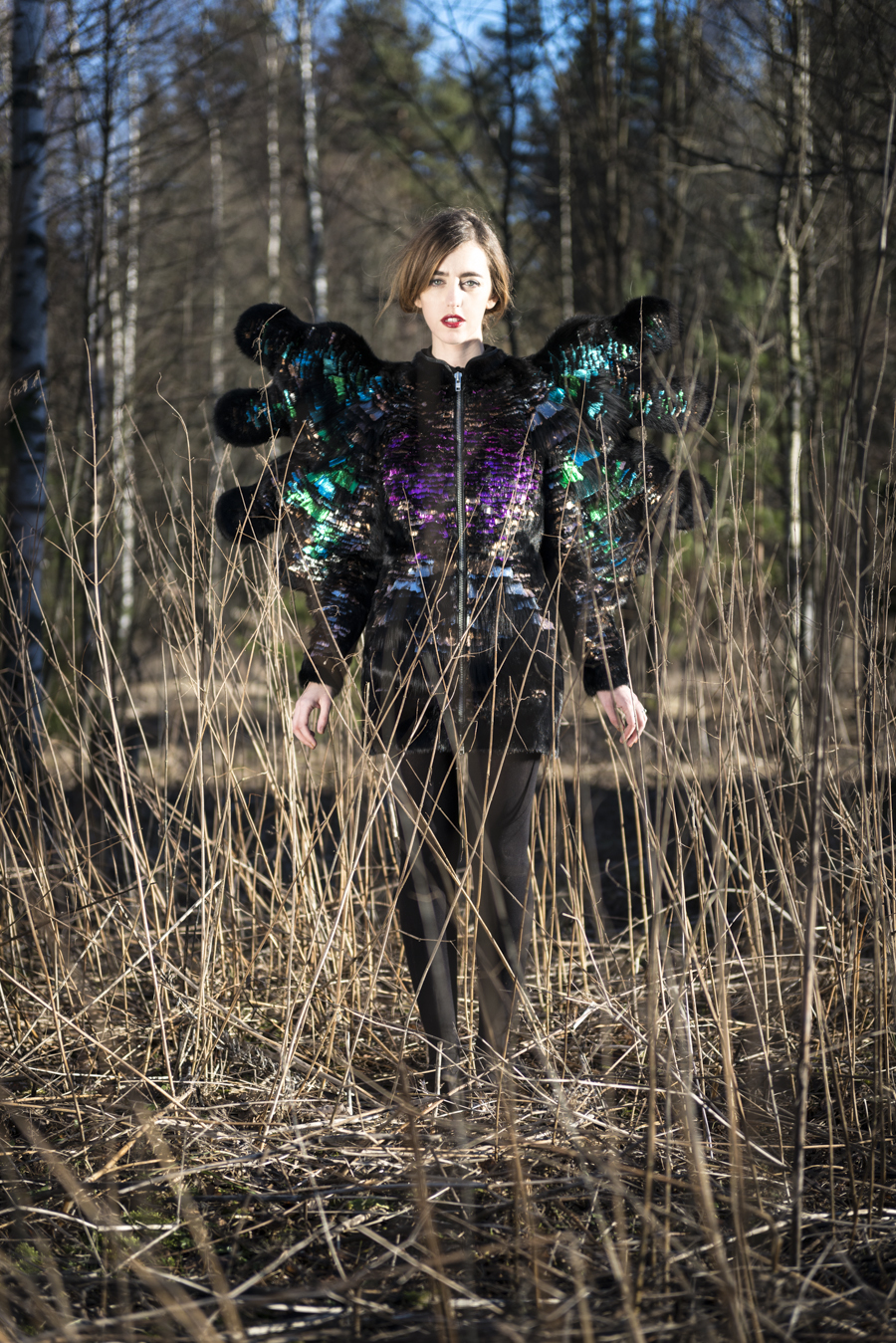 During my trip to Saga Furs, I was fortunate enough to try on Nikoline’s design, click here to view the post.